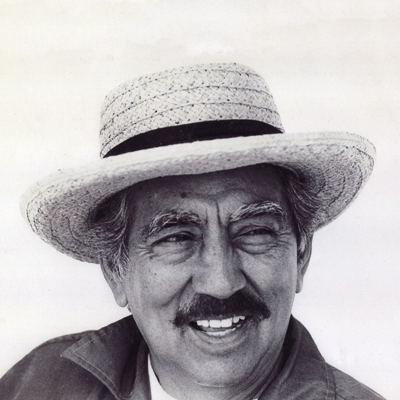 Alfonso Ochoa is originally from Ciudad Juarez, Chihuaha, Mexico. He is a musician, painter, and community leader. Ochoa has lived in San Francisco for over 60 years and has been fundamental in increasing the visibility of Latino culture in San Francisco. Born and raised to a family of musicians, his father was a pianist and music teacher. Ochoa has been teaching Piano/Keyboard for over 25 years at the center.

As a long time resident of San Francisco, Ochoa has helped establish various musical venues in San Francisco. He served as Musical Director for over 25 years at Club Elegante, now Club Malibu, overseeing their special performances. During this time, he played alongside various musical legends as they made their tour stops in San Francisco, including, Juan Gabriel, Joan Sebastian, Perez Prado, Isela Vega, and many more. He has also gone on tour with El grand Combo de Puerto Rico, Los Angeles Negros, and Los Graduados de Colombia. Ochoa has also served as the Director of The Comite Mexicano Civico Patriotico and the Cinco de Mayo festival for over 25 years and Musical Director for the Magic Theater for ten years. 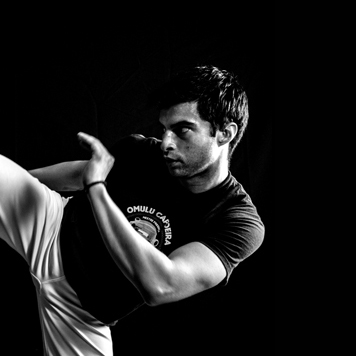 Armando Ibarra started his martial arts training at the age of 4 and has been training Capoeira for 10 years. Armando has a background in teaching since he was 16. He has experience teaching people of all ages, but has largely placed his focus on the youth. Armando has been assisting with teaching youth classes at local parks and recreation centers under his instructors. He is no stranger to the MAS program as he has grown up in the Mission District and has taught youth in the Mission Cultural Center. He believes that training Capoeira can truly change a person through discipline while introducing a new language, culture, and other skills that one may learn practicing it. 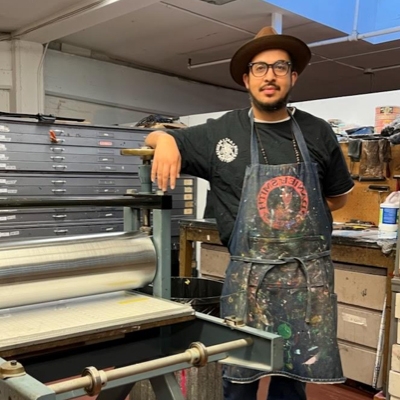 Eduardo Valadez Arenas is a Mexican-American Mixed Media Artist from Mexico City by way of the Coachella Valley. He is currently residing and working in the bay area. His art explores themes of diaspora, his Mexican-American heritage, and California street culture. His mixed-media works on paper and handmade panels contain elements of cartoon illustrations, sign painting, traditional printmaking techniques, and street art.

Outside of the studio, his work as an educator has led to collaborations with art-based organizations like Kala Arts Institute, Ryse Youth Center, Riverside Museum of Photography, Oakland School for the Arts, Yerba Buena Center for the Arts, and Centre International des Récollets Paris.

He Holds a Bachelors of Fine Arts in Community Arts / Printmaking From California College of the Arts and a Single Subject Teaching Credential From Otis College of Art and Design. 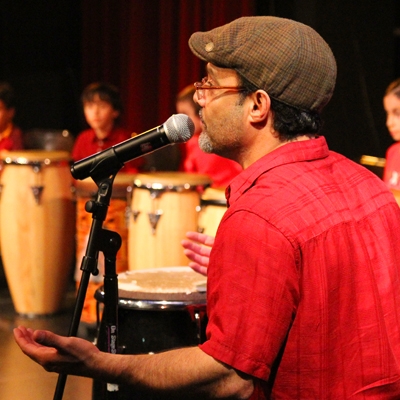 Héctor Lugo is a percussionist, singer, song-writer, and educator. Born and raised in Puerto Rico, he moved to the San Francisco Bay Area in 1989 to pursue graduate studies in sociology at UC Berkeley. Shortly thereafter, he begun to perform with some of the great bands and artists in the local Latin, Jazz, and Afro-Caribbean music scenes, dedicating himself to what would become a lifelong of study and teaching of Latin American and Caribbean music, history, and culture.

Lugo is the founder and director of the Latin-Roots band La Mixta Criolla, producing its debut album AfroTaíno (RoundWhirled records, 2011), and a founding member of the bomba ensemble Grupo Aguacero. He has written music for two plays — “Living in Spanish” and “Burnt American Dreams” — and numerous children’s and youth performances. His compositions and arrangements have been featured in the documentary film “Dolores,” about the life of the great labor organizer and feminist leader Dolores Huerta, and the acclaimed compilation “Salsa de la Bahía,” vol. 2 (Patois Records, 2015).

Lugo has designed, managed and implemented educational and cultural arts programs in collaboration with SFJAZZ, the San Francisco Symphony, Stern Grove Festival, Oakland Public Conservatory of Music, Oakland Youth Chorus, San Francisco Community Music Center, and the San Francisco, Berkeley and Oakland Unified School Districts. He has also developed classes and workshops for children and youth at community centers such as La Peña Cultural Center, Mission Cultural Center, the San Francisco Boys and Girls Club, Youth Art Exchange, and Loco Bloco, among others. He is the founder and co-director of the Bay Area Bomba y Plena Workshop which since its creation in 2000 has promoted the appreciation, study and performance of Puerto Rican folkloric music through regular classes and workshops, master classes with visiting artists, concerts, class recitals, and music festivals. He is the founder and co-director of Las Quenepas Youth Ensemble, dedicated to the study and performance of traditional Puerto Rican bomba and plena music and dance, and has coordinated and led study trips to Puerto Rico for groups of children and youth from the Bay Area.

Lugo has done extensive research on Latin American history, politics and culture, with particular emphasis on the sociology and historical foundations of Latin-Caribbean music, literature and culture. He has lectured at UC Berkeley, Stanford University, UC Santa Cruz, San Francisco State University, Mills College, City College of San Francisco and Humboldt State University. Mr. Lugo has a B.A. in Sociology and Latin American Literature from Haverford College, an M.A. in Sociology from UC Berkeley with specializations in social theory and the political economy, history, and culture of Latin America, and has done extensive Ph.D. level coursework and research as a Ph.D. candidate at the University of California at Berkeley’s Sociology Department. In his spare time he likes to read, cook, work with wood and travel. 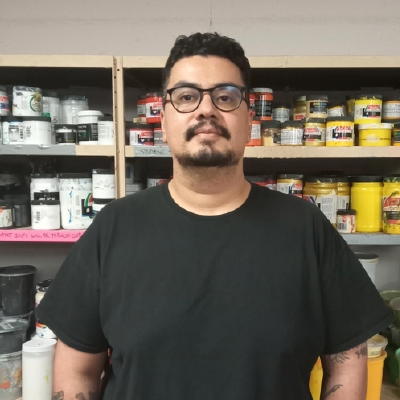 Jesus Hernandez is a Chicano artist born and raised in Oakland, CA. He has been drawing and painting since a young age and received a Bachelor’s in Fine Arts from the Academy of Art University in 2016. He works in multiple mediums including oil paint and printmaking, is inspired by urban surroundings, and has shown in various galleries in the Oakland/San Francisco Bay Area. 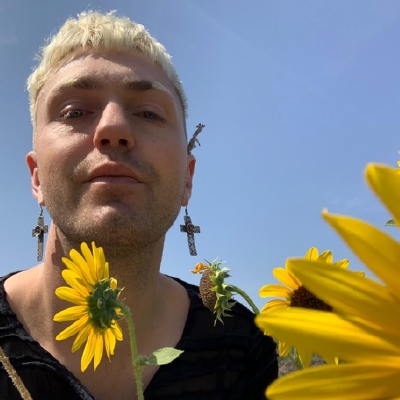 Jordan Joel is a multi-disciplinary artist based in San Francisco. After receiving a degree from Berkeley in Conservation Biology and Documentary Photography, Jordan has continued to pursue the arts as a medium of self-expression, therapeutic release, and storytelling. Their work deals with subjects ranging from sustainability and family tradition, to contemporary queer identity. Jordan’s classes focus on teaching technique, encouraging experimentation, and allowing for self-discovery through an improvisational, yet structured process. 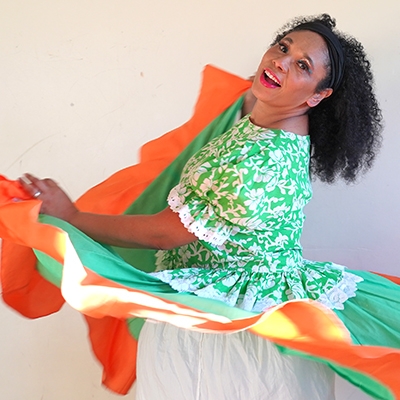 Lydia is a choreographer, dancer, and co-founder of the Tradicion Peruana Cultural Center. She grew up in Lima, Peru. Lydia Soto has taught and performed Afro-Peruvian dance since came to the United States in 1993. Lydia comes from a very talented family. She started dancing in Peru from a very early age in schools, colleges, and communities. Today Lydia is the choreographer-director of Jaranon y Bochinche dance performance company. Lydia also teaches classes to students of different ages throughout the Bay Area.

Lydia has led her group to participate in the San Francisco Ethnic Dance Festival, Theater Artaud, Encuentro Popular, and at many other Bay Area venues. Lydia also was part of “Windows to the World” and “Raices Negras”, which are two well-received dance and music performances in the Bay Area. 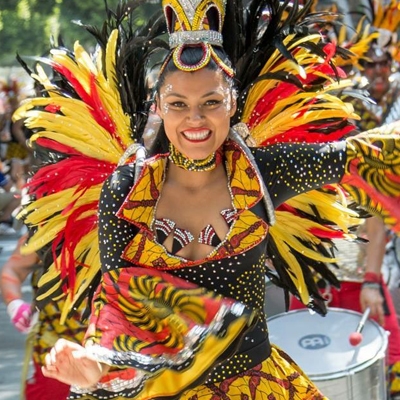 Born in Salvador, Brazil and raised in San Francisco’s Mission District, Metzi Henriquez is Artistic Director of Fogo Na Roupa performing company and Grupo Carnavalesco. She began her dance journey at San Francisco School of the Arts Dance Department where she studied under the direction of Elvia Marta and trained with artists such as Michelle Martin (Afro Haitian) and Reginald Savage (Jazz). After years training, performing and teaching in Eurocentric based dances, Metzi found inspiration in dances of the African Diaspora and became a student of Afro-Brasilian dance and folklore with Mestre Carlos Aceituno founder of Fogo Na Roupa. Her teaching repertoire consists of Step-in Out Dance Studio, SF Arts Education Residencies and guest artist workshops Oakland School of the Arts Savage Dance Summer Intensive, SF School of the Arts World Dance Department and New World Ballet.

Metzi‘s choreographies have been featured at Oakland Raiders Half times show, SF 49ers pre game show, Ethnic Dance Festival, World Arts West Rotunda Series and SF Symphony 100 year Celebration, among others. Her pride and joy is tending to the 30 year legacy of Mestre Carlos Aceituno, Fogo Na Roupa who under her direction has continued to win numerous Carnaval grand prizes and A Corazón del Barrio Award from Mission Cultural Center. She also holds a Masters in Clinical Psychology and has been a practicing therapist for over 15 years for immigrant youth and families in San Francisco. 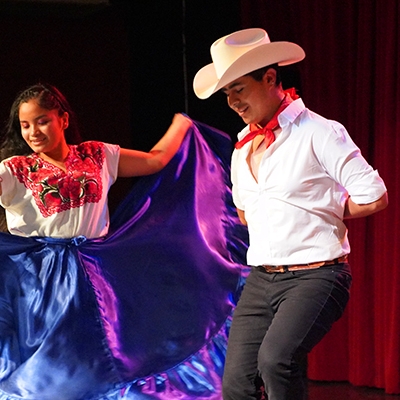 Pablo Daniel Jimenez García joins us at the MCCLA as a folklórico dance teacher. Pablo‘s intention is to create community and raise confidence in communal spaces. Pablo enjoys his time working alongside young artists of our community. Crossing the border from Mexicali to Calexico with nothing more but his childhood, traveling between families and futures, and learning from customs and artistic practices, Pablo explores the movement that our immigrant people have expressed since colonization, and the seeds rooted in resistance.

Pablo studies sociology, social work, and dance at UC Berkeley. While also forming part of Ensembles Ballet Folklorico de San Francisco. Pablo focuses his work on the possibilities of dance. He dances with love and resistance to create a world of wisdom and uses his art as an avenue of expression that belongs to all of us. 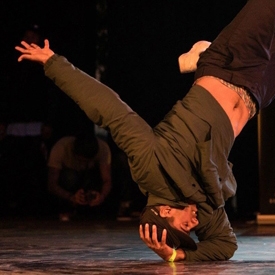 Rahul Doraiswami was born and raised in the Bay Area, has been a member of the its break-dancing scene for 8 years. He represents Hybrid Crew out of San Jose, California and Weirdside out of Boston, Massachusetts/ Berkeley, CA and is competitive in the Bay Area and throughout the country.

Rahul fell in love with the breaking as a sub-culture during his undergrad at Berkeley and helped to preserve open practice spaces there after a historic practice spot had been taken down. His goal with the open sessions on Monday nights is to create a community space where individuals and crews can come to hone their craft. Aside from training to become a better dancer, Rahul believes that preserving these spaces for bboys and bgirls is important to preserve the culture that has given so much to him. 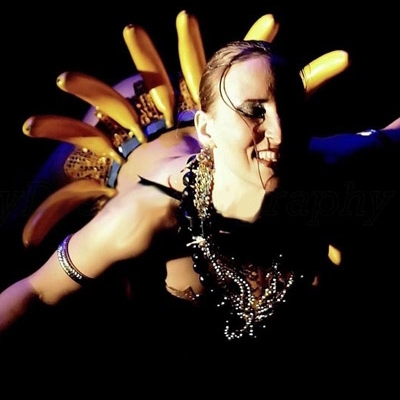 Rasa Vitalia is an award-winning professional dance performer, vocalist, songwriter, and performance artist and one of America’s most highly regarded popular solo entertainers. She performs to her own world music & EDM songs in a variety of shows. Rasa Vitalia has performed internationally including Mexico City, Canada, New York City, Los Angeles, San Francisco, Chicago, Toronto, and New Orleans at several famous venues such as The Apollo in Harlem, La Perla Cabaret in Mexico City, The Slipper Room in NYC, The House of Blues in NOLA, The Globe Theater in Los Angeles, The Virgin Mod Club in Toronto, The Carnaval in Mazatlan, Johnny’s in San Miguel de Allende, The Stratosphere in Vegas and The Fillmore in San Francisco.

A world class act, Rasa Vitalia is guaranteed to remain a positive force in the entertainment industry. Her mad shake appeal will inspire and set our hearts and stage on fire! It’s an experience you will never forget! 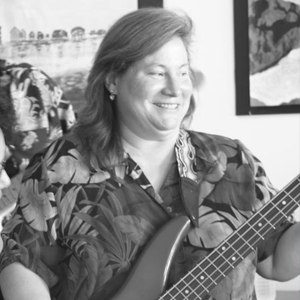 Suzanne Cortez, Music Instructor, has performed with World Renowned musicians such as Ritchie Ray and Bobby Cruz, Karl Perrazo (Santana), Chepito Areas (formerly with Santana, Latin Rock Hall of Fame, and Michael Carabello (formerly with Santana). She has also played with Pharaoh Sanders who’s performed with (John Coltrane) she has also performed with Francisco Aquabella of Malo and has played with Pete and Sheila Escovedo. She is known “To keep the music going.” She leads her own Orquesta Adelante, the Mission District’s own.

She brings her 30 years of music experience to the MCCLA. Suzanne has led choirs and ensembles and has taught many youths and adults to sing and play instruments that have not had any musical knowledge or experience.