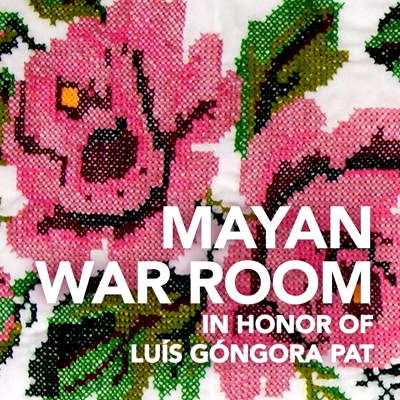 A Fundraiser and Art & Revolution exhibit of his family’s struggle for justice, including original embroidered protest artwork by Luis’s widow and daughter from Yucatan. The Mayan War Room will operate as a pop-up office space of www.justice4luis.org during the month of April.

Saturday, April 7th marks the 2nd year anniversary of the killing of Luis Góngora Pat by two officers of the San Francisco Police Department. Luis was a Mayan man from Mexico’s Yucatan peninsula, and a migrant worker in San Francisco for fourteen years. Since his homicide, his family has been on a journey to make Luis’s killers and their abettors accountable. To honor his life and family’s struggle, a pop-up Mayan War Room has been set up for this year’s anniversary.

The Mayan War Room will keep office hours during the month of April to showcase the wide array of strategies, tactics and actions carried out by the family to demand justice in the past two years. Here we will hold a fundraiser for Luis’s family in Teabo on the 7th, and launch a new campaign, in coalition with other supporters and groups, to pressure D.A. Gascón to “Charge Killer Cops or Resign!” The war room will also display hand-sewn images of Luis by Doña Carmen May Can and Rossana Góngora May, widow and daughter, respectively, and other female relatives of the deceased. The hand embroidered images are intended to speak to the protest posters made by San Francisco artists that also bear Luis’s image. The women of Teabo join the protest from afar with their own artwork rooted in their own artistry and “hilo contado” style for which their village is known.