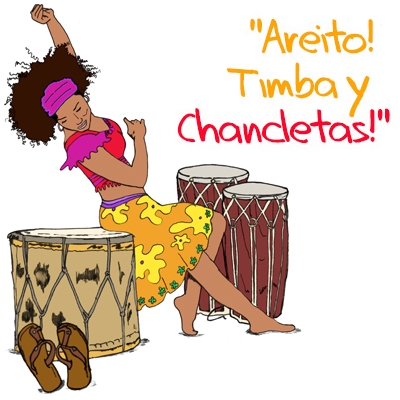 MCCLA students, staff, and Board, in conjunction with Edison Charter Academy [K- 8], is proud to present its entry for the San Francisco Carnaval Parade, and the 2011 theme of “Live Your Fantasy!” “Areito! Timba Y Chancletas!” is our fantasy of what the Pre-Columbian festivals held throughout the Caribbean region have evolved into. “Areito” is a Taino word used throughout many of the major islands in the Caribbean, including Cuba, Puerto Rico, Hispaniola, and the Bahamas, where ever the Taino lived and gathered for their celebrations. These gatherings would last for days according to early chroniclers of the indigenous people of the Americas.

The choreography and music of MCCLA’s contingent under the leadership of Manuel I. Suarez will combine elements of indigenous, Afro-Cuban, Latin popular dance, and French tradition. “Tumba Francesa” is the result of the French diaspora to Cuba after the Haitian revolution several centuries ago. “Tumba Francesa” is characterized by stately quadrille style formations and vestments reflective of the French colonies in the late 1700s. “Timba” is the latest hot Cuban dance form and rhythm. The “Chancleta” portion of the presentation is joyfully rhythmical, as the dancers produce their own musical accompaniment with the wooden sandals called “chancletas”. “Chancleta” is not only a wooden sandal, but also a rhythm and a dance from the “Oriente” or eastern part of Cuba. The dress is the traditional “guarachera” – known to the general public as “mambo” shirts, i.e. heavily ruffled sleeves for both men and women. Musicians will play traditional Oriente style “Comparsa” or Carnaval music. The music is characterized by tumbadoras, a specific “campana” or bell rhythm, and a “boku” – a large round drum sustained from the shoulder, typical of the Oriente region of Cuba. The professional musicians will be complemented by drummers from Edison Charter Academy, a K – 8 school located in San Francisco’s Mission District, as well as students from MCCLA.