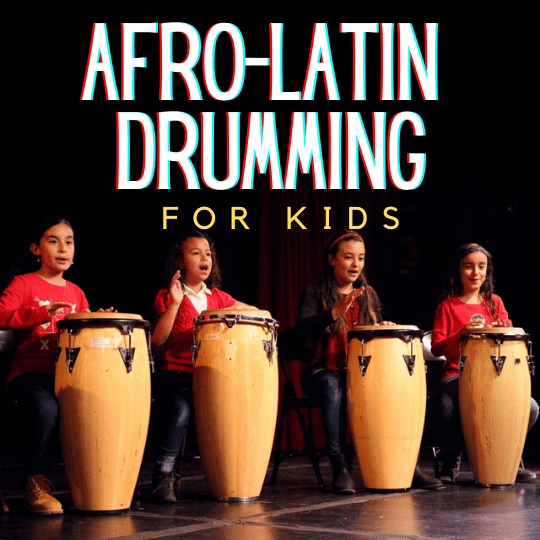 Through drumming, singing and storytelling children are introduced to the musical traditions and culture of the Caribbean and Latin America. Students learn how to play percussion instruments such as the congas, panderos de plena, bongó and other hand drums, as well as güiro, maracas, campanas, and cuás (drum sticks). They learn rhythms, songs and stories from Puerto Rico, Cuba, Dominican Republic, Haiti, Venezuela and Colombia and get the opportunity to perform at the end-of-semester class recitals. The focus of the class is on hands-on learning and fun activities, but the curriculum is designed to develop musicianship, physical coordination, bi-lingual literacy skills, multi-cultural awareness, and comfort with public speaking and performance.

Héctor Lugo is a percussionist, singer, song-writer, and educator. Born and raised in Puerto Rico, he moved to the San Francisco Bay Area in 1989 to pursue graduate studies in sociology at UC Berkeley. Shortly thereafter, he began to perform with some of the great bands and artists in the local Latin, Jazz, and Afro-Caribbean music scenes, dedicating himself to what would become a lifelong study and teaching of Latin American and Caribbean music, history, and culture. He has performed and recorded with a wide range of artists such as Bobby Céspedes and Conjunto Céspedes, Louie Romero and Grupo Mazacote, Modesto Cepeda and Cimiento the Puerto Rico, Luis “Chichito” Cepeda and the Los Cepeda Ensemble, Jackeline Rago and the Venezuelan Music Project, Larry Vuckovich, the John Santos Sextet, Salsa legend Pete “El Conde” Rodriguez, Los Pleneros de la 21, Cuban son ensemble Pellejo Seco, Chuchito Valdés, Mono Blanco, Edgardo Cambón y Candela, and Zimbabwean traditional dance troupe The Chinyakare Ensemble, to name a few.  Lugo is the founder and director of the Latin-Roots band La Mixta Criolla, producing its debut album AfroTaíno (RoundWhirled records, 2011), and a founding member of the bomba ensemble Grupo Aguacero. He has written music for two plays — “Living in Spanish” and “Burnt American Dreams” — and numerous children’s and youth performances. His compositions and arrangements have been featured in the documentary film “Dolores,” about the life of the great labor organizer and feminist leader Dolores Huertas,