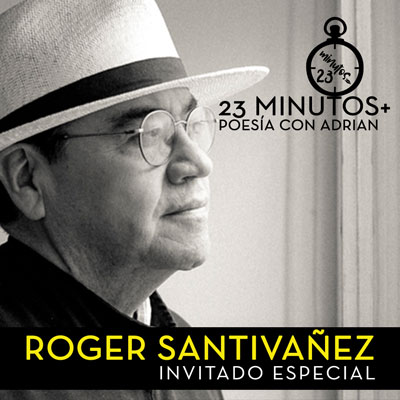 Poetry will be in spanish, la poesía será en español.

(23 minutes with Adrian) is a project that brings poetry to your home, in an easy and interactive way, with great artists of the word such as, Teresa Palazzo Conti, Roger Santivañez, Mario Bellatin, Anais Azul, Every Thursday we will have a different poet, sharing a different style, besides listening to poetry you will be able to interact with them!

Argentina, author of eleven books of poetry evaluated by Spanish-speaking academics. Included in the anthology “Contemporary Argentine Poetry”, Volume I Part XXIII of the Fundación Argentina para la Poesía (Selection of Argentine poetry from the so-called -Generation of 40)

Doctor of Literature (Litt. D.), honorary degree awarded by the World Academy of Arts and Culture (UNESCO), and the Pen Club in Prague, Czech Republic, 2016. International Human Rights Prosecutor in defense of children affected by war and poverty. (Mission Diplomatique Internationale Humanitaire) Court of Conscience, Rwanda 1994. Special guest by the government of the Republic of Macedonia to Struga International

He was born in Piura, north coast of Peru. He studied Literature at the Universidad Nacional Mayor de San Marcos de Lima and obtained a Ph.D. in Latin American poetry from Temple University, Philadelphia, USA, where he later worked for almost twenty years. She participated in La Sagrada Familia (1977), was a member of Hora Zero (1981) and founded the state of neo-avant-garde poetic revolt called Kloaka Movement (1981-1986). In 2006 the volume Dolores Morales de Santiváñez, Selection of Poetry (1975-2005) appeared and in 2016 Sagrado.

His novel Salón de Belleza, first published in 1994, has been translated into 18 languages and was chosen, in 2007, as one of the 100 best novels written in Spanish during the previous twenty-five years.

Peruvian first generation immigrant Anaís Azul (they/them) is a California based singer-songwriter, composer, and teaching artist. Described as “stunningly honest and vulnerable,” their artistry engages with music as a tool for community building, cross-genre collaboration, and collective healing.

Azul writes music that is in conversation with jazz harmony, classical melodies, and Latin American singer-songwriter traditions. Their songs are bilingual (Spanish and English) and about mental health, queerness, facing harsh realities and finding inner peace in spite of chaos.